EU Women on Boards Directive: When will the blockade finally end?

EU Women on Boards Directive: When will the blockade finally end?

For ten years, the Women on Boards Directive was pending. Now, it might be possible that the proposal for a directive from 2012, which was blocked in the Council, could finally achieve the necessary majority. That binding quotas are an effective means to increase the share of women in leadership positions, has been confirmed once again this year by the Women.Management.Report, presented by the Chamber of Labour on 7 March 2022.

Until now, the Women on Boards Directive has been thwarted by a blocking minority, among other by Germany and the Netherlands, but also by strict opponents of the Directive, such as Hungary and Poland. Due to the new German government of SPD, Greens and FDP, the resistance in the EU's largest country now seems to be vanished. Hence, 18 of the 27 EU countries would support the directive – enough to be adopted and to enable a mandate of the Council for negotiations with EU Parliament and Commission. Data collected by the “European Institute for Gender Equality“ (EIGE) shows that the difference at management level is still blatant: in the second half of 2021, women on average held 30.6 %, thus not even a third of the positions on supervisory and management boards of the largest listed companies within the EU; in 2003, the figure stood at 8.3 %. This partial victory has primarily been achieved by binding quotas, illustrated by the examples of Austria, France, the Netherlands and Germany. The new Women.Management.Report by the AK shows that since the quota was introduced in Austria in 2018, the share of women in listed companies has increased from 22.4 % to currently 35.1 %. Those numbers show that the quota is suitable to increase the share of women. However, the trend has lost momentum, as the quota cap of 30% weighs heavily on many companies. By comparison, women in management positions remain outnumbered. The Report identifies several reasons for the under-representation of women in leadership positions: prejudices, discrimination, gender stereotyping career plans and the fact that the higher up the hierarchy a position is, the fewer objective selection methods are applied during recruitment processes. This means, the similarity principle applies, hence men are recruiting men.

Austria and Cyprus are at the tail end with regard to equality in management. Almost every fifth company listed at the Vienna Stock Exchange has an all-male board. Even among the 20 ATX companies, which in their role as leading companies, should pay more attention to gender equality, with Mayr-Melnhof Karton AG, a company can be found that has not a single woman on its management or supervisory board. As a consequence, the conclusion in Europe must be to apply the quota also to management positions in listed companies and to raise the increasing quota for supervisory boards to 40 % in Austria. With regard to increasing the share of women in management, the AK demands an annual monitoring report in order to be able to evaluate developments in a more transparent way. Another request is to couple management bonus payments to a minimum share of women in new recruits in sectors dominated by men.

Iceland with a quota of 47.1 %, France with 45.3 % and Norway with 41.5 % demonstrate how it can be done. They are the only European countries that so far – based on national binding quotas – have been able to achieve an almost balanced distribution of leading positions. What unifies the three countries is the fact that the women’s quota had already been introduced several years earlier, with Norway in 2003, Iceland in 2010 and France in 2011 leading the way. Compared to Norway, where only listed companies are affected, France includes all companies with at least 500 employees and Iceland with more than 50 employees. In addition, Iceland has a duty of disclosure for companies with fewer than 50 employees, thereby tripling the share of women in only three years after introducing the quota from 16 % to 48 %. Austria in contrast only started in 2017 and excludes listed companies, if they employ fewer than 1,000 staff. France has applied stricter rules in 2021 already, expanding the quota to managers and senior managers in companies. Hence, Austria should be confident enough to take further steps; France and Iceland have demonstrated – the quota does the trick! 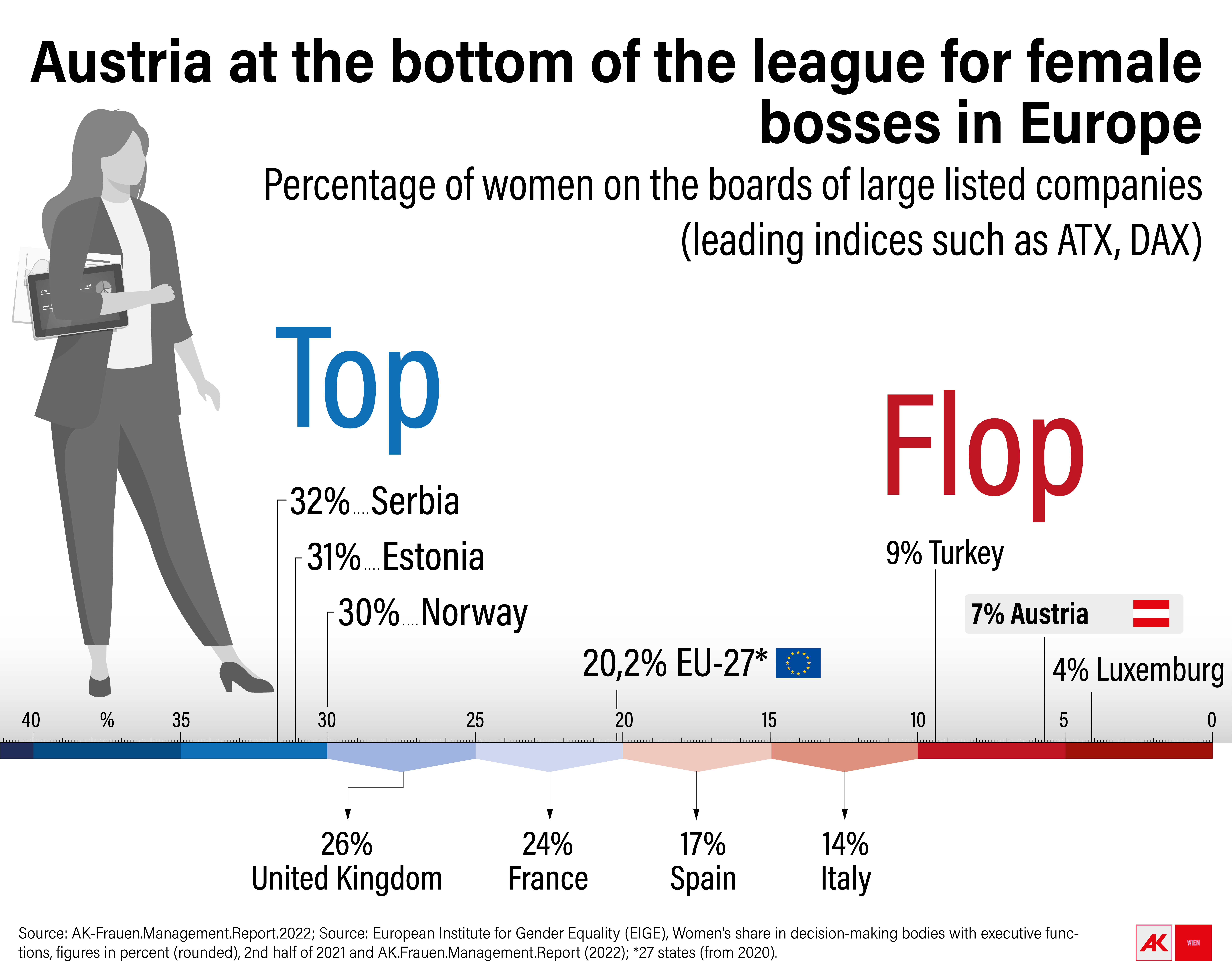 AK EUROPA: Women on supervisory boards: When will the EU break the “glass ceiling”?

AK EUROPA: Spotlight once again on the Women on Boards Directive

AK EUROPA: Gender inequality and working poverty in the EU

AK Wien: Women.Management.Report.2022 – The quota does the trick (german only)