Is there a need for reforms, what is done to meet it and which improvements are made? The so-called Reform Barometer 2016, which has been developed by the Bertelsmann Stiftung and which was presented in Brussels at the beginning of March, addresses all these questions.

The Reform Barometer assesses the reform efforts of individual countries based on five factors of the Social Inclusion Monitor: Poverty Prevention, Equitable Education, Labour Market Access, Social Cohesion and Non-discrimination, and Health. As such it provides the static view of the Social Justice Index with an important dynamic component.

In all these sectors data was gathered on behalf of over a 1,000 quantitative expert interviews. Thereby, the perceived need for reforms, the activity of the respective Member State and the quality of these efforts were estimated. In doing so, the Reform Barometer creates the basis for an aggregated view of all these different sectors and enables comparisons across EU-countries and the Union as a whole. Hence, it is not only possible to depict meaningful reforms, but also – as it is the case with Greece – to point out the catastrophic consequences of a wrong, austerity-driven reform policy. The study aims at providing fact-based evidence to foster discussion and to strengthen the Union's social inclusiveness as a whole. 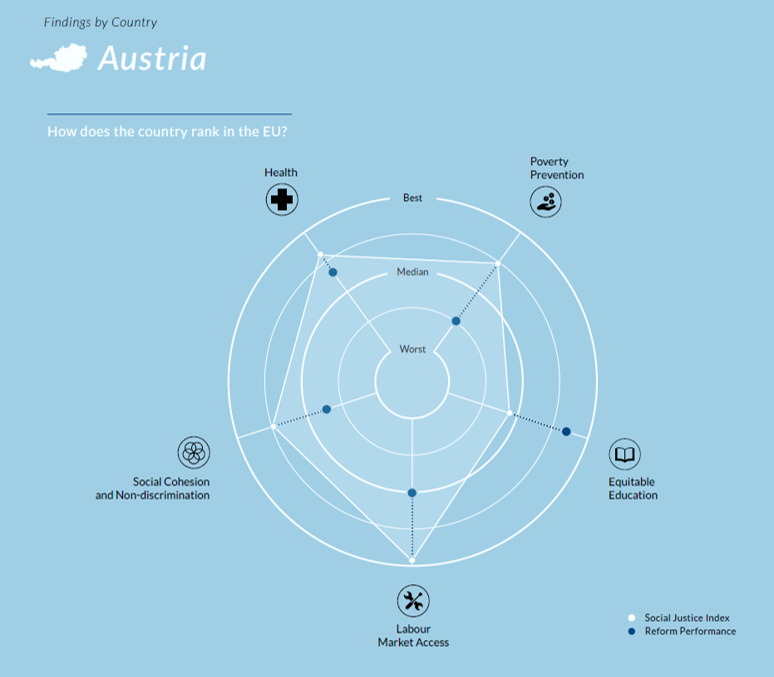 Austria ranks 9th in the EU-wide ranking and is hence performing quite well on an aggregated level of the Barometer. However, a great need to reform has been identified with regard to the education system to promote social (upward) mobility, in order to give children - apart from formally equivalent rights of access to the education system - also actual opportunities for education that are independent of their socio-economic status.

The AK has already a long tradition in criticising the above average level of intergenerational transmission of education in the Austrian school system; the higher qualified a person already is, the higher the impact of their parents’ education. This results in the fact that even in the 21st century hardly any daughters or sons from working-class families are attending Austrian universities. Those who succeed nevertheless, are faced with particular issues that are only partly of a financial nature but hardly recognised at a university level. According to an AK study, restrictions via “introductory phase” have further reinforced this trend.

The segmentation of educational opportunities might further increase due to the latest trends of digitalisation. The so-called “Digital Divide” does not only occur between age groups, but is already visible with regard to different school types. Ideas of how this gap might possibly be closed include for instance the creation of a financing base for high-quality open educational resources (OER) within the scope of the School Book Campaign.

Abridged version of the study

Long version of the study