Digitalisation is advancing, but not at the same speed and to the same extent for everyone

Last week, the European Commission presented the so-called “Digital Economy and Society Index” (DESI). Austria is again ranking in 10th place. Commissioner Andrus Anisp requested further investments to prevent the gap between the front-runners of digitalisation and those who made less progress from widening even further. With regard to international comparison, EU average shows that there is still a lot more to be done.

The DESI is part of the Digital Single Market Strategy of the Commission. The objective is to liberate further growth potential by strengthening the digital Single Market. The Index therefore measures the progress Member States have made in respect of digitalisation based on five differently weighted components: Connectivity (25%), Human capital (25%), Use of internet (15%), Integration of digital technology (20%) and Digital public services (15%).[1]

Whilst Denmark, Finland, Sweden and the Netherlands, the four front-runners of digitalisation, are able to keep up with international competition, the same does not apply to EU average and even less to those Member States, who rank at the bottom (Italy, Greece, Bulgaria and Rumania). According to Commissioner Ansip, one could detect slow, but continuous progress in the EU.

Austria ranking in the upper-mid range

Austria is ranked 10th in the weighted overall ranking; however, looking at the five different components of the index in detail, one can see a slightly more differentiated picture. With regard to Connectivity, which refers to the broadband internet connection, Austria has fallen by one place compared to the previous year and is now ranked in 15th place at the EU-level. Apart from that, Austria continues to do poorly in respect of Use of internet, which also explains the ranked position 20. These finding were based on which activities consumers carried out on the internet: for example listening to news and music or watching films online, engaging in social networks as well as online banking and shopping. With regard to Integration of digital technology through companies, Austria plummets four places at once to position 14. However, positive developments can be reported concerning the components Human capital und Digital public services. Ranking in 7th and 5th position respectively, Austria lies above EU average. 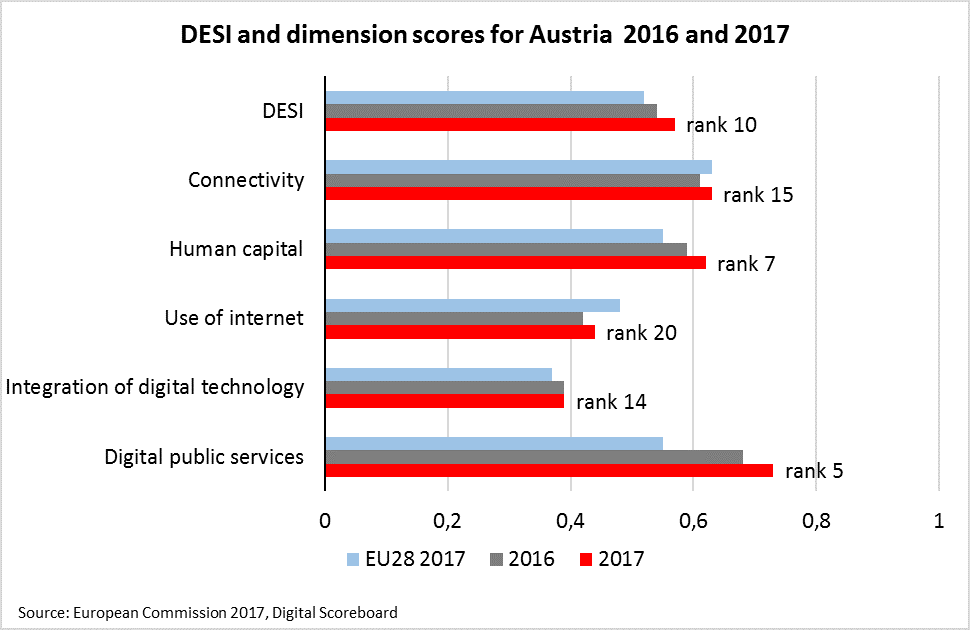 The Index does not show the distribution of use and digital competencies within society. For example, the share of women in Information and Community Technology (ICT) in Austria continues to be between 10% and 12% (2011 to 2013). Here too, a stronger structural improvement for women, which goes beyond the isolated integration in individual companies, is urgently required. Furthermore, the teaching of digital competencies needs to be expanded. However, it is not only women who do not adequately benefit from the digital change. There is also a digital divide between different education facilities: Austrian vocational colleges are often less well equipped and engage less in eLearning than other school types as the ICT Infrastructure Survey 2016 of the Ministry of Education shows. This divergence, however, bears the risk that these young people will later be left behind in a digitalised labour market. Apart from that, the AK Youth Study suggests that the Use of internet by young people strongly varies according to educational qualification. Thus, those with higher educational qualification do not only use the internet for passive recreational use but also for learning and obtaining information.

Detailed country profile of the DESI for Austria

Visualisation of components and DESI according to countries, indicators and over time

Press release of the Commission on DESI

AK vision paper: How do we create a fair digital change?

[1] The components are made up of 31 indicators and can, as it is the case with the overall index, adopt values between 0 and 1, whereby 1 corresponds to the highest degree of digitalisation. The Commission's website provides the option of graphically depicting the publically available DESI data, of weighting the components differently a well as of breaking down the indicators in accordance with socio-economic characteristics.